Shower Rebuild – What is it and could you benefit from one?

Shower Rebuild – What is it and could you benefit from one?

At The Shower Repair Guys, we often get quote requests from customers outlining the works they feel like they need to fix their shower issue, what they don’t know, is that this is what we call in the business a Shower Rebuild, also known as a Shower Reline. 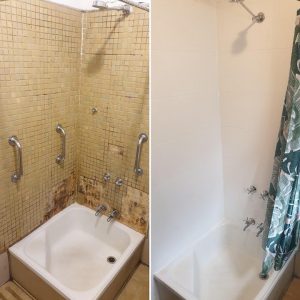 Before and after shower rebuild – Brighton

Signs You Need a Shower Rebuild

Being confident of knowing if you need a shower rebuild isn’t always easy and we’re here to help! Signs your shower is leaking are usually exposed when the waterproofing (or lack thereof) has failed, and water is now seeping under your shower base, or at the bottom corner of the wall – either behind the shower area or adjacent.

You can also tell that the waterproof membrane has failed when there are watermarks directly on the ceiling below the shower if the shower is located on the second storey.

At The Shower Repair Guys, we want to provide you with a solution that is going to last, as we do not believe in quick ‘band-aid’ fixes. We prefer to recommend a rebuild so that you, the customer, have confidence in the knowledge that the underlying cause of the leaking shower has been completely fixed.

The Process of a Shower Rebuild

When undertaking a shower rebuild, our tradesmen will:

These rebuilds can be seamless, we have actually had customers say to us “If I hadn’t seen that you removed/replaced these items over the course of the job, we wouldn’t even know it had happened!”

Our customers have also taken the opportunity to enlarge their shower during rebuilds, use feature tiles to make the shower area stand out from the rest of the bathroom. It’s a really cost-effective way to revamp an entire bathroom while fixing the problem leaky shower. 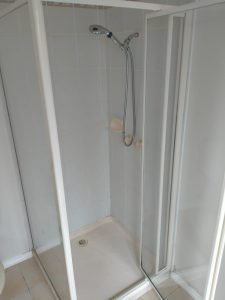 Before the shower rebuild in Langwarrin 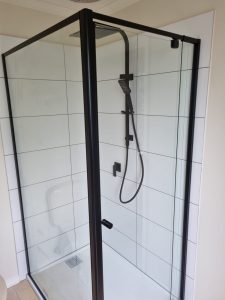 After the shower rebuild in Langwarrin

The Cost Of A Rebuild Project

These jobs generally cost between $4800-$7000, a big differential I know… but should you decide to go down the shower rebuild route, some customers like to explore their options such as changing the size or style of their base and screen. Sometimes they opt to save their existing shower screen and save $$$ on their project, others opt to have a niche installed to provide that much needed clutter-free storage space in their shower area.

Often, when completing a rebuild on an older shower, going for a feature shower is the way to go. This is usually due to not being able to source tiles that match the rest of the bathroom. The options however are endless.

The Shower Repair Guys are registered with Victorian Building Authority (VBA) and therefore all work undertaken is honestly priced and delivered to a high standard. Jamie and his experienced team invite you to contact them on (03) 7067 7623 or Click here to send an email for a free no-obligation quote.